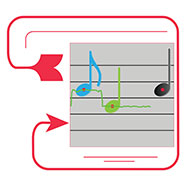 Your Personal Singing Teacher that Listens to You

Listening Singing Teacher doesn’t give you a straight line when singing? That is OK. One of the characteristics of your voice is: to vibrate. Vibrato is defined by Wikipedia as follows:
“Vibrato is a musical effect consisting of a regular pulsating change of pitch. It is used to add expression to vocal and instrumental music. Vibrato can be characterized by the amount of pitch variation ("depth of vibrato") and speed with which the pitch is varied ("speed of vibrato").“

In the above exaggerated graphic the depth of the vibrato is the change in height (the lower turning point against the upper turning point). If for example you should sing an A4, defined to swing with 440 Hz, and you will probably be singing between 430 Hz and 450 Hz. Then the depth would be 20 Hz.

The speed of the vibrato tells you how many cycles (a cycle in the above sample is going from 440 to 450 to 440 to 430 and back to 440 Hz) you produce during a second. This characteristic is described in Hz.

The speed of vibrato is so slow that you can see it with listening singing teacher: It is the not so straight line! The frequency is around 5 Hz, but can be trained to be faster or slower.

So don’t worry, it is natural. Especially as a beginner, you should accept the vibrato as it is, just try to move the middle frequency to match the target pitch. So that listening singing teacher will show a green - slightly wobbling - line. If the peaks get yellow or pink, you are too high or too low. If listening singing teacher's pitch sensitivity is set to 50 cents then the color change indicates a deviation of more than half a semitone.